I admit it. I’m not much into brown rice. My excuse has always been that I don’t eat that much rice. I eat one or two servings a month. So why eat brown rice. It doesn’t contain that much fiber.

Well, I am getting older now and beginning to rethink some of my dietary choices. This decision was brought on by thinking about diseases related to diet, such as obesity, diabetes and hypertension. I don’t have them, yet. And I am trying to avoid them. So some changes were in order for me. Small, incremental and nonpainful changes are the ones I am concentrating on. After all, life and food are both supposed to be enjoyed.

Recently, I worked on a rice presentation for some associates of mine. I had to include brown rice, ‘cause it’s rice and you gotta include it. I made a brown rice, pear and cranberry salad. And I fell in love. (Okay, it wasn’t chocolate, but you know what I mean.) It had a wonderful flavor, nutty, sweet, crunchy, and colorful. I was hooked – on brown rice.

Brown rice contains more resistant starch than white rice. So exactly what is resistant starch? First of all starch is digested at a different rate. The starch in potatoes digest very rapidly, whereas, that in beans, barley or long grain brown rice digest more slowly, and cause a slower and lower rise in blood sugar levels. Resistant starch goes all the way through the small intestines without being digested at all. Behaving more like a fiber, and in some cases is classified and labeled as a fiber.

For those who would like to begin your journey to better eating, I am including my recipe for pear and walnut rice salad with cranberries. If you are going to get started, may as well start with something good! 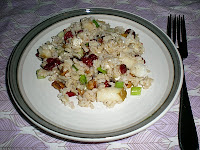 Directions:
1. Combine all ingredients in a large bowl; toss to coat. If salad is dry, add more dressing. Serve over lettuce leaves, if desired.

Cooking Brown Rice
The procedure for cooking brown rice is similar to that of white rice. However, brown rice requires more time to cook. Forty-five to 50 minutes as opposed to about 15 minutes for regular long grain white rice. Most types of rice will yield about 3 cups of cooked rice for every 1 cup of dry. Rice can also be cooked and frozen. For every cup of brown rice, use about 2 to 2 ½ cups of water. Instant brown rice can also be used. Although it is generally more expensive. 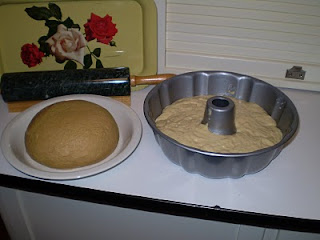 Yes, I still make homemade bread. And, I do realize that I can purchase bread at the grocery store. I have not always been this way. I can still remember my first loaf of bread. It was so bad. I think I hid it in the trash or someplace. It was so bad that I didn’t make another loaf of bread for about 10 years. I would make rolls. Somehow they just didn’t present the same mental blockage as loaf bread.

Finally, I was in graduate school one of my roommates was making homemade bread and convinced me to give it a try. I tried and really enjoyed it. The bread turned out great and I was on my way to bread baking glory. I started with Anadama Bread and Sally Lunn. I don’t know why these two, other than I had the recipe for them. I soon moved on to other bread, whole wheat, cinnamon rolls, potato, and buttermilk. Baking bread became my passion. It’s just something about the yeast growing and watching the bread rise. (I know for some of you this is like watching paint dry. But I am a foodie. Enough said.) And I still get excited about cutting that first slice of bread. The crispy crust and that very soft texture.

Okay, enough drooling over homemade bread. Here is what I have learned about cooking. If you cook, you will periodically screw something up. That’s just life. I have also learned that cooking is part art and part science. And understanding the science has helped to make me a better cook. Now when I totally screw up a recipe, I go back to the science to attempt to determine what went wrong. Over the years, I figured that I most likely destroyed the yeast in that first loaf of bread. I probably added the yeast to liquid that was too hot. I still don’t use a thermometer to test the liquid before adding the yeast. I use the inside of my wrist. If it is comfortable on my wrist, it should be okay to grow yeast. I once left the salt out and that was a total disaster. That bread never stopped raising. The function of salt is to control the growth of yeast, strengthen the gluten, and help develop flavor. Most yeast breads only have a tiny amount of salt, but put it in. It’s vital to good yeast bread.

I recently ran across my first two loaf bread recipes. And since I have found them to be tried and true, I thought I would share them with you.

Anadama Bread
It is believed that Anadama bread began in New England. The story goes like this, “A fisherman, angry with his wife, Anna, for serving him nothing but cornmeal mush with molasses, one day added yeast and flour and baked it. He ate the bread and exclaimed, Anna, damn her.” This recipe makes too much dough for a regular loaf pan. I bake this bread in a small pie pan or cookie sheet.


Directions:
1. Combine water, salt, and cornmeal in a small saucepan. Bring to a boil, stirring constantly. Remove from heat and pour into the bowl of a mixer. Stir in molasses and shortening. Cool to lukewarm.
2. Soften yeast in warm water. Allow yeast to foam, about 5 to 10 minutes. (Note: If it does not foam, toss and start over.)
3. Add yeast to the cornmeal mixture. Stir in enough flour to make a sticky dough. Knead on floured surface until smooth, about 10 minutes.
4. Spray a large bowl with cooking spray or coat with oil. Place dough in bowl and turn to coat with oil. Cover with plastic wrap and allow to raise until volume doubles.
5. Punch down and shape as desired. Place in pan and let raise again until nearly doubled. Bake at 375°F for 40 to 45 minutes.


Sally Lunn
Sally Lunn bread is almost a cross between a cake and bread. Some historians believe this bread was first made by protestant refugees from France, who called this bread “soleil et lune”, meaning sun and moon. This bread is unusual in that it bakes in a fluted tube pan. The dough is also fluid, so don’t add extra flour.

Directions:
1. Soften yeast in the warm water. In a mixing bowl, cream shortening and sugar. Beat in eggs and salt. Stir in 1½ cups of the flour; beat vigorously. Stir in milk and the softened yeast; mix well. Add the remaining 2 cups of flour; beat vigorously. Cover; let rise in a warm place until doubled in volume (about 1 hour).
2. Stir batter down. Spoon into a greased 10-inch fluted tube pan. Cover; let rise again until double (30 to 45 minutes).
3. Bake in 325°F oven for 10 minutes. Increase oven temperature to 375F and bake for 20 minutes. Remove from pan. Serve warm or cool. 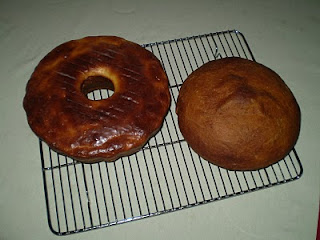