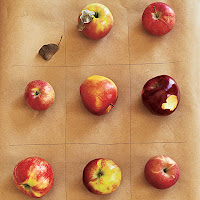 I like apples. Now that probably does not come as a shock to anyone. Apples are just one of those fruits that everybody seems to like. We eat them as a snack. Put them in cakes and sometimes donuts. We make them into applesauce. They are a great accompaniment to pork. The ways with apples just seem endless, kinda like chicken.

If you really like apples, now is your time. Fall is the perfect time to purchase apples. Most cities have an apple orchard within a short driving distance. Some are u-pick orchards and some are just go and buy what you want (my favorite). If you can’t make it to an orchard or farmers market, check out the varieties at your local grocery store.

Back in the dark ages, it seems that we only had two kinds of apples, golden delicious and red delicious. But, we have come a long way. It seems that every year I find a new apple to try. Some are sweeter, some more tart, but all are fun to try. I’ve found that different apples have their own distinctive flavor. Some apples are better suited for cooking and others are better for eating.

For more information on apples and how to use them, try these resources.

If you try any of these sites or recipes, please comment. We would love to hear from you.

Email ThisBlogThis!Share to TwitterShare to FacebookShare to Pinterest
Labels: apples

Strolling Through the Farmers Market

It’s fun go to farmers markets and see how the season changes. Here in the Midwest, early spring brings rhubarb, asparagus, sugar peas and lettuce. Later these items stop appearing and we get cucumbers, corn, okra and summer squash. Finally, watermelons, pumpkins and winter squash signal the end of the growing season and the last few weeks of the market.

On one of my last trips to the market, I purchased okra, a staple in the South, but still something of a novelty in the Midwest. I recently found a recipe for okra fritters and could not resist the urge to make them. I decided to serve them with some collard greens that I grew.

5. Wipe skillet clean. Add enough oil to skillet to measure ¼ inch and heat over medium heat. Cook rounded tablespoons of batter (6 or 7 fritters per batch), turning once, until golden, 2 to 3 minutes per batch. Transfer to paper towels to drain. Keep warm in oven while making remaining batches. Serve immediately. Give these a try and let us know how you like them.