Tomatoes - At Their Prime

I decided that tomatoes should have their very own posting. And why not? Farmer’s markets are overflowing with lots of varieties of tomatoes. They are a perennial favorite of home gardeners. Tomatoes are everywhere – for now. In a few weeks the good ones will be gone until next year. So why not enjoy them in their prime.

Botanically speaking the tomato is a fruit. We consume the tomato primarily as a vegetable. That means tomatoes are usually found in savory dishes. Tomatoes are consumed raw, cooked in sauces, soups, as part of a sandwich, and salads. Occasionally, tomatoes are used to make jams and preserves.

When most of us think of tomatoes, we think of the basic red or maybe the cherry or grape tomato. There are thousands of varieties of tomatoes. They range in color from green, to yellow, to orange, to red and probably a few others.
Give some of these other tomatoes a try. You may be surprised at how different the flavors really are.

Recently home gardeners and farmer’s market vendors have been showing off heirloom tomatoes. These are varieties that have been passed through several generations. These generally have some characteristic that the grower likes. Heirloom varieties include Cherokee Purple, Green Zebra, Brandywine and Mortgage Lifter. There are several companies such as Seed Savers (http://www.seedsavers.org/) that are good sources of heirloom seeds.
Heirloom Tomato Salad
Serves 4.
Ingredients:
1teaspoon salt
1 Tablespoon Dijon mustard
1 teaspoon mayonnaise
½ teaspoon black pepper
3 Tablespoons red wine vinegar
3 Tablespoons olive or vegetable oil
2 pounds mixed heirloom tomatoes
Directions:
In a small bowl, combine salt, mustard, mayonnaise and black pepper. Slowly stir in the vinegar. Add oil in a slow stream, whisking constantly to emulsify. Toss with tomatoes and serve immediately.
Notes on This Recipe
This is a variation on a recipe I found on a website. It was quite interesting reading the comments. One reader added parmesan or blue cheese. Someone else added red onions. While others added basil and yellow bell peppers. That’s the fun thing about cooking, you can change a recipe to meet your tastes and it is all perfectly fine. I found this dressing to be a bit acidic. If you prefer less acid, just reduce the amount of vinegar. 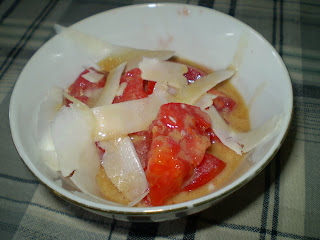