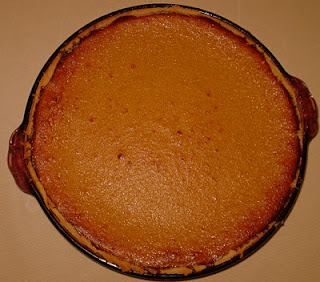 I am a fan of Cook's Illustrated books and magazine. I like to know the science of food and how to make the ‘best’.

With Thanksgiving fast approaching, I decided to try and make the ‘best’ pumpkin pie. Since I did not grow up with pumpkin, I enlisted the help of a few friends. I started by asking around to see how people make pumpkin pie. One friend says, they always used butternut squash because they grew so much of it that why should they use a canned product. Yet, another friend says, I just use the recipe on the back of the can of pumpkin.

I started with the recipe from Cook's Illustrated (Nov/Dec, 2008), since it was the ‘best’. I also found recipes from a couple of Midwestern cookbooks. After all, a Midwesterner should know how to make pumpkin pie. I gathered my ingredients and began making pies. And here are my results.

The Cooks Illustrated recipe made the pie with the mildest flavor. It was deemed as being ‘good’. One pie was made with condensed milk and fresh pumpkin or squash. It was deemed as ‘gummy’ and good but not the ‘best’. The last was made with canned pumpkin and evaporated milk. A friend summed up his thoughts on this pie in this manner. “It tastes like Mom’s. “ He didn’t say anything about the best, but it tastes like Mom’s.

This little experiment reminded me that sometimes it’s not the best that we seek. We seek the comfort of the familiar, tradition, home and Mom. And I think that’s just fine. In this day of instant messaging and all other ‘instant’ stuff, it’s nice to hold on to tradition.

To all those folks at Cook's Illustrated, thanks for giving us the ‘best pie’. But apparently Mom still rocks.

Finally, I came up with my version of Mom’s and Cook’s Illustrated pumpkin pie recipe. I made it for my same friend. He liked it, but wished it was more orange, aka, the canned stuff. If you like, you can substitute one can of pumpkin and one cup of sweet potatoes.

Directions:
1. Mix all ingredients together and pour into pie crust. Bake for 40 to 45 minutes in a 425°F oven. Center will be slightly soft, but will set upon cooling.

Note: If desired the filling can be made in a food processor.
Pin It