In recent years, moderate evidence has emerged about the health benefits of consuming seafood. The guidelines recommend increasing consumption of seafood to 8 or more ounces per week (less for young children). Seafood contributes a range of nutrients, notably the omega-3 fatty acids, eicosapentaenoic acid (EPA) and docosahexaenoic acid (DHA). Moderate evidence shows that consumption of about 8 ounces per week of a variety of seafood, which provide an average consumption of 250 mg per day of EPA and DHA, is associated with reduced cardiac deaths among individuals with and without pre-existing cardiovascular disease.

There are three types of omega-3 fatty acids. Two, EPA and DHA, are found mostly in coldwater fish. Fish that live in cold water have adapted to higher omega-3s allowing the fat in their tissues stays liquid. Salmon contains the highest amount of omega-3s, followed by trout, white tuna, king mackerel, sea bass, herring, oysters, and sardines. The third type of omega-3, alpha-linolenic acid (ALA) is found in plant sources, such as flaxseed, English walnuts, soy, wheat germ and canola oil. Most potential health benefits are attributed to EPA and DHA, which are readily absorbed and put to use. Your body converts ALA to EPA, and to a lesser extent, DHA. However, this process is relatively inefficient. Only about 5% is converted to EPA.

If you are looking for tasty ways to increase your consumption of seafood, give these recipes for salmon and catfish a try.

1. Preheat broiler. Line a broiler pan or baking sheet with foil, then coat with cooking spray.

2. Place salmon pieces, skin –side down, on the prepared pan. Season with salt and pepper. Combine sour cream, mustard and lemon juice in small bowl. Spread evenly over the salmon.

3. Broil the salmon 5 inches from the heat source until it is opaque in the center, 10 to 12 minutes. Serve with lemon wedges. 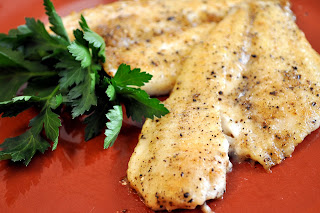 2. Pat fish dry. Brush each side with coating mixture.