Every year I plant a garden, probably more to see who will win, me or the elements.  Up until this year, I thought I stood a chance.  This year, I am fighting the heat.  The heat won.  You see, it was cold in the Midwest and then, boom, it was hot. 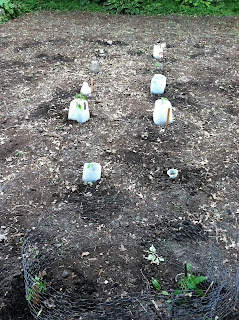 And now to top things off, the rabbits are loose and wrecking havoc in my garden.  I tried putting little cutout milk jugs over the tomatoes.  It appears the rabbits used them as a perch from which they could gnaw my entire garden of tomatoes.  Instead of tomatoes, I have stalks.  My gardening buddy took one look at my garden and promptly stated, “Why, Miss Jones, your garden looks worse than mine”.  Now if that isn’t a vote of confidence, I don’t know what is.  I’m on my third planting of tomatoes.  I once had hopes of tomato sauce and a few other tomato dishes.  I now hope for enough tomatoes for a couple of BLT’s.


I planted okra this year, just like all the other years.  I thought they were safe.  They came up, so nice and cute.  I went out one morning and my okra plants were just a thing of beauty.  Yes, I’m a proud mama.  I went back later in the afternoon and what did I have?  Okra stalks!  Those little jokers ate my plants in broad daylight.
I now have my entire garden in either a fence or milk jug cover (thank God I drink milk).  It’s actually quite comical.  Some of the milk jugs are even double stacked.
I suppose in some ways, this is sweet revenge.  You see, as a child my favorite book was Peter Rabbit.  I thought it was so cute for Peter to be loose in Mr. McGregor’s garden.  Well, you got it.  I am now Mr. McGregor.  And Peter Rabbit ain’t cute.   I have now switched over to Mr. McGregor’s side.
For those of you who have managed to grow a few strawberries, here is a recipe for you.  For the rest of us, a trip to the farmer’s market might be necessary.
Strawberry Sauce
Serves 4.
Ingredients:
1 quart fresh strawberries
¼ cup sugar


1.       Slice strawberries.  Add sugar and stir.  Refrigerate mixture for about 1 hour.
2.       Cook over low heat for about 10 to 15 minutes.  Cool.
3.       Serve with ice cream, pancakes, angel food cake or as you desire.
Regardless of how you serve your strawberry sauce, eat it outside so that you can guard the garden.
Pin It