Pulses Are Having Their Day! 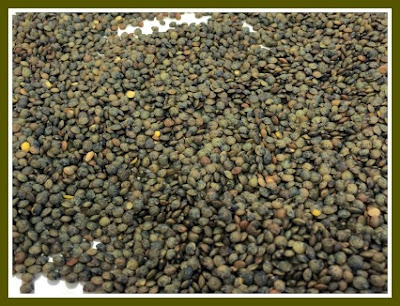 The United Nations declared 2016 to be the International Year of the Pulses. The goal is to heighten public awareness of the nutritional benefits of pulses as part of a sustainable food production system aimed at improving food security and nutrition. Hopefully, this action will create opportunities to improve worldwide utilization of pulses.

Legumes are often consumed by vegetarians as a source of protein. When combined with a grain, they make a complete protein. Meaning, the provide all the essential amino acids in the correct proportions.

In support of the International Year of the Pulses, I am writing about lentils. If you are new to cooking dry beans, lentils are a good place to start. They do not require soaking and they cook quick, usually in about 30 minutes.

I found a recipe for Caviar de la Croix Rousse. When I find a recipe that refers to beans and caviar, I generally think of black-eyed peas, sometimes referred to as Texas Caviar.  Well, this recipes calls for French green  lentils or lentilles de Puy - one of my favorites. I did change a few things, so I am not sure mine is authentic. First of all, I used ham instead of bacon. I also added Dijon mustard, because I think it should go in just about anything. If possible, I would add some red bell pepper. I thought it needed a little color. 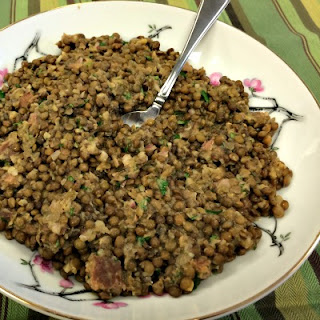 2. Place lentils in a 4 quart saucepan. Add about three cups of water, ham, bay leaves, and onion. Cover and bring to a boil. Reduce heat and simmer for about 20 minutes until tender.

3. While lentils are cooking, make the dressing. In a small bowl combine shallots, Dijon mustard, olive oil, vinegar, and parsley. Stir to combine.

4. When lentils are cooked, remove onion and bay leaves. Drain. Remove ham and chop. Combine lentils and dressing; add ham and parsley. Stir. Taste for seasoning and adjust.
Pin It