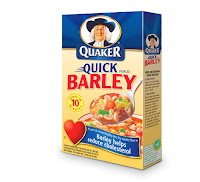 Most of us know people that like rice, corn, and oatmeal. But when was the last time someone told you they liked barley? Barley is just not a food most of think about eating. When most of us do think about barley, it is in the form of beef and barley soup.

In honor of National Nutrition Month (http://www.eatright.org/Public/content.aspx?id=11498), I thought I would write about barley. Just like most of you, I don’t think much about barley. However, since starting this blog, I gotta think outside the box. Grains have long been featured in many cuisines around the world. They provide about 75 to 100 calories and 4 to 6 grams of fiber per ½ cup serving. Grains are an excellent source of vitamins and minerals. Barley is even allowed to bear a statement that reads, ‘As a part of a healthy diet, the soluble fiber in barley helps reduce cholesterol levels’.

A recipe for Hearty Barley Fruit Salad is included in this blog. Some of us thought of it as Hearty Barley Ambrosia, but we are old enough to remember ambrosia. Now before turning up your nose, barley does not provide much flavor. It provides a nice chewy texture. It’s a good way to sneak grains into the diet. If you want to go beyond this recipe, here are a few other resources to help you get started.

Directions:
1. In a medium saucepan bring water to a boil; stir in barley. Reduce heat; cover and simmer for about 10 to 12 minutes. Drain and allow barley to cool.