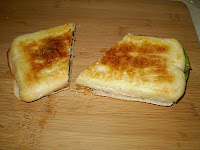 Paninis have become popular over the last few years. A panini is essentially a type of Italian sandwich that is usually heated between a press. The press makes very cute grill marks. Paninis have a crunchy crust and a nice warm melting inside. They are to put it mildly, delicious and expensive. Therefore being the cheapskate that I am, I have been on a mission to make my own paninis.

Since I am cheap, I also don’t want to spend over one hundred bucks on a press. Not just to make a sandwich. I have a rule, before I purchase something for the kitchen, it must perform at least two functions. If it doesn’t, it won’t make it into the house. Therefore, I have a Panini press free house. But I want a Panini, so I “invented” my own press. To make my press, get two heavy duty skillets and a large can of something, like tomatoes. 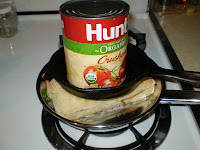 When I make a Panini, I get to become as creative as I possibly can. I “build” a Panini the same way that I build a salad. Start with good bread. You can add mustard or mayonnaise, but this is a Panini, so let’s think out of the box. I like something salty like an olive salad, cheese, such as Harvarti, smoked cheddar, gouda. I normally add meat to mine, but it is not a necessity. I also like seasonal fruit like apple in the fall, peaches and nectarines in the summer. Panini just sounds fancy, it is nothing more than a grilled cheese sandwich. However, it is necessary to butter the bread to get a crispy brown crust. Now mind you, my paninis don't have those fancy grill marks, but I didn't spend a hundred bucks either.
Pin It