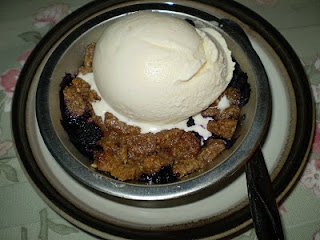 You name it and I like them. I don’t make them too often. I don’t want to roll out the crust. Don’t have the time to make the topping. Let’s face it. Sometimes we just don‘t have the time to prepare some of the dishes that we would really like to.

However summer fruits are just too good to pass up a cobbler or crisp. Recently I came across a crisp topping recipe that makes enough for two crisps. The real high light of this recipe is that it can be frozen and used when needed. So now I get to have my crisp without a lot of extra work when I a short on time. An added bonus is that this mixture can be used for individual crisps. This way you won’t have crisp in your refrigerator for days on end.

Directions:
1. Preheat oven to 350°F. Place nuts in a single layer on a cookie sheet; toast until aromatic, about 5 to 7 minutes. Stir the nuts occasionally to ensure even toasting. Remove from oven; cool completely.

2. Place nuts and oatmeal in a food processor and process until coarsely ground. Add flour, both sugars, cinnamon and salt. Blend to combine.

3. Cut butter into one tablespoon size and add to flour mixture. Process on low speed until pea-size clumps form, 4 to 5 minutes. Makes enough for two crisps.
Pin It