Blue Cheese – Back to My Assignment 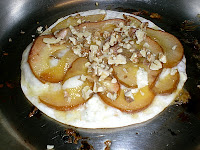 During the fall semester I gave an assignment to my students to go “hunting” for cheeses. I wanted them to find cheeses they normally would not consume and go to stores they normally would not visit. Well, I decided that I would do the assignment, too. Oh! What was I thinking! I am still working on completing my assignment. Thank God, I am not getting a grade.
I decided to use a Danish Blue Cheese. Blue vein cheeses are made with a mold, Penicillin roqueforti. Blue cheeses generally have a sharp flavor and are somewhat salty. Legend has it that blue cheese was developed by accident. In the early days, cheese was aged in caves which were great moisture and temperature controlled environments and favored the growth of mold. French blue cheese is known as Roquefort and is made from sheep’s milk. Gorgonzola is Italian and Stilton is English. In America, it is called blue cheese.
I have been trying to decide what to make with this cheese. My original thought was to make a blue cheese and walnut focaccia. That idea did not pan out. Couldn’t decide what to do if I didn’t like it. (If by chance you are in Lincoln Nebraska, Le Quartier Baking Company (http://bit.ly/g021vT) makes an excellent Blue Cheese and Walnut bread. I highly recommend it.) I thought about mac n cheese, but decided that was a no. My student suggested that I put blue cheese on steak or make steak tacos. Great idea, but that didn’t make the cut either.
I decided to make my own recipe. If everyone else can do it, so can I. I decided to use my favorite things that I like to have with blue cheese, namely pears and walnuts. I decided to make a quesadilla. If I didn’t like it, I would not be stuck with a ton of it. Here is the basic recipe, flour tortillas, blue cheese, Monterey jack (to cut the saltiness and mellow the flavor), pears, cooked in honey, and toasted walnuts, for crunch. 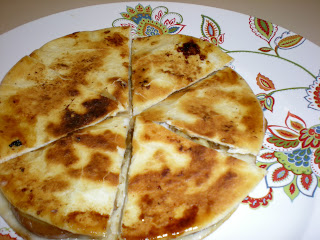 1. Heat honey in a large skillet. When hot, add pears and cook until pears are translucent.

2. Preheat a skillet. Brush one side of each tortilla with oil. Top with both cheeses. Add pears and walnuts. Cover with second tortilla. Flip and brown the second tortilla. Slice and serve as desired.
For a light lunch, this would be a nice accompaniment to a salad. And if you wish to make your quesadilla differently, go ahead! There is no quesadilla police out there to stop you.
Enjoy!
Pin It