Cooking at the Library

I love the library. But this week (April 10 -16) I have an especially good reason to love the library. This is National (Public) Library Week. Libraries around the country are celebrating in various ways. We thought what better way to showcase our library (http://bit.ly/fMmaXM) than with a posting on cookbooks at the local library. 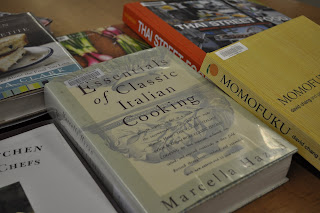 It’s actually fun to read through the library’s cookbook collection. I also like using the library to “test drive” a cookbook. If I don’t like a book, I don’t have to purchase it. I talked with our local librarian in charge of purchasing cookbooks. While people are purchasing electronic versions of other books, we still want a hard copy of cookbooks. The library has actually reduced the purchasing of cooking DVDs in favor of hard copies of cookbooks. During the recent economic downturn, the sales of cookbooks actually increased. People are also checking out more cookbooks from the library. When people cut back on dining out, they started to cook at home.

Our library purchases about ten to twelve cookbooks per month. If there is a book that you would like, the library welcomes your suggestions (http://bit.ly/fe0fvx).

When visiting my library, I picked up a copy of Marcella Hazan’s Essentials of Classic Italian Cooking. I decided to make one of the pasta dishes. I chose to make a spinach sauce with ricotta and ham. I chose this one because most Americans seem to think only of pasta with tomato sauce. Italian food is much more than pasta and tomato sauce.

Spinach Sauce with Ricotta and Ham 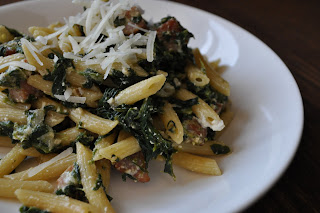 Directions:
1. Preheat a large skillet. Add 1 tablespoon butter. Add spinach to skillet once the butter has melted. Cook until spinach is dry. Remove spinach and set aside.

2. Add ham to skillet. Cook until ham starts to brown. Add spinach back to skillet. Remove from heat and add the nutmeg, no more than ⅛ of a teaspoon.

3. Cook pasta as directed on the package. Toss pasta with spinach and ham. Add ricotta, remaining butter and Parmesan. Serve immediately, with additional cheese, if desired.

What We Thought of the Recipe: We liked it. We also felt that garlic and/or onions would have been nice additions to the recipe.
Pin It