The Happy Meal Gets Happier 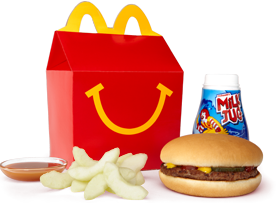 While I was attending the Society for Nutrition Education Conference in Kansas City, McDonald’s announced that there would be changes to the Happy Meal.  The Happy Meal will become healthier.  I found it interesting that McDonalds made this announcement during a nutrition education conference.  Needless to say, the conference was all abuzz about McDonald’s and the menu change.  So I thought I would weigh in on the issue myself.

McDonalds will begin rolling out the new Happy Meal in September 2011, with the goal of having them in all restaurants by the first quarter of 2012.  The new Happy Meal will automatically include produce (½ serving or ¼ cup apple slices) and a smaller amount of French fries – 1.1 ounces.  Okay, these are not bad ideas.  You will still be able to choose the meat option, hamburger, cheeseburger, or nuggets.  Your choice of beverage will include fat-free chocolate milk or 1% low fat white milk.  It is also my understanding that the soda is still an option for the meal.

Along with changing the Happy Meal, McDonald’s is committed to offering improved nutrition choices.  The company will now champion the well-being of children, expand and improve nutritionally-balanced menu choices and increase customers’ and employees’ access to nutrition information.


Could McDonalds do better, of course they could.  I would like to see a real apple in that Happy Meal.  However, I have been told that McDonald’s tried whole apples and kids would not eat them.  The apples  spoiled, meaning McDonald’s lost money.  We have to face the fact that companies are in business to make money, not to make us healthier.  I applaud McDonalds’ efforts.  But, if they really wanted to make me happy, when they build new restaurants in low income neighborhoods, build a grocery store.  Fast food should not be the only choice for low income populations.  I want to see McDonald’s attached to a nice grocery store, well stocked with affordably priced fresh produce.  That to me would be a real choice.
Pin It