It seems that all bloggers have a wish list.  There’s the old saying that if you can’t beat’em, join’em.   So join them I did.  I came up with my own wish list.  While some bloggers focus on things they want, (aka, gifts), I decided to focus on dishes I want to make.  At first I chose things like breads, cakes, and chocolate ice cream.  Well, my student helper spoke up, “Why, Dr. Jones, you don’t have any vegetables on your list.  You only have baking stuff”.  So I relented and decided to add some healthy vegetables to the wish.  And yes, these are vegetables that I really want to cook.


If you notice, I have crossed out a few things on my list, like chocolate ice cream and mac & cheese.  But ratatouille remained on the list.  So at the end of this gardening season, I finally got around to ratatouille.  I’m not sure why I wanted to make ratatouille.  Other than, I just did.  I suppose after seeing the movies, Ratatouille and Julia and Julie, I have become somewhat fascinated with French food.


Ratatouille is an eggplant casserole originating in the Mediterranean.  It can be served hot or cold, as an accompaniment to meat or as an hors d’oeuvre.  I looked all over for a recipe.  I found some that grilled the vegetables, some that threw all the vegetables together in a casserole dish and allowed them to simmer.  Some that included basil and parsley and some that omitted them.  I was in a real quandary as to what to do.  Other than zucchini, tomatoes and eggplants, I knew nothing about making ratatouille.  So, I went to the ‘source’, Julia Child’s Mastering the Art of French Cooking.  On page 503 of volume 1, is a recipe for ratatouille.


Here is Julia Child’s recipe for ratatouille.  I did make a few changes.  I hope she won’t mind. 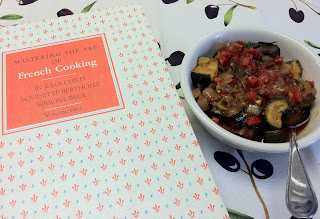 
1.     Cut eggplants into 1-inch cubes.  Set aside.  Cut zucchini into a similar size and set aside.  Toss each vegetable with ½ teaspoon salt and allow to sit for 30 minutes.  Drain and towel dry.


3.     In the same skillet, cook onions and peppers.  Stir in garlic.  Add tomatoes and cook until most of the juices have evaporated.  Season with salt and pepper, to taste.


5.       At this point the casserole can be refrigerated until ready to cook.


1.      I did not peel the eggplant.  Thought I might need those antioxidants in the peel.