The idea for this posting started, not with National Pi(e) Day, but when someone approached me with a problem they were having with lemon meringue pie.  You see, here is the problem.  A layer of water formed between the filling and the meringue.  I approached one of my foodie colleagues about this problem.  Her reply, "Well, I never liked meringue.  So as far as I am concerned that's a good thing.  Makes it easier to take the meringue off."  OK, so she wasn't going to be any help.

I checked out one of my favorite resources, Bakewise by Shirley Corriher.  According to Ms. Corriher, the watery layer between the filling and the meringue is caused by undercooking.  When meringues do not cook completely, the egg whites weep as they slowly dissolve and release liquid.  Meringues also bead when they have been cooked at too high of a temperature.  Beading is caused by proteins on the surface that overcook and squeeze out moisture.

Another issue with meringue topped pies is shrinking away from the filling.  The addition of cornstarch aids in a reduction of shrinkage.

For those of you who just want to bake a good pie for National Pi(e) Day, here is my 'perfect' lemon meringue pie. 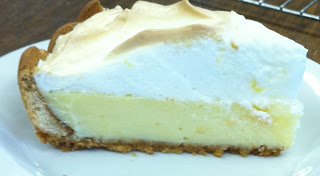 1. Crust:  Finely grind graham crackers in food processor.  Add melted butter and blend until moist crumbs form.  Press into the bottom (not the sides) of a 9-inch pie plate.  Arrange vanilla wafers, rounded side out, around the side of the dish.  Set aside.

4.  Meringue:  In a small saucepan, combine 3 tablespoons of sugar and cornstarch.  Add water and stir.  Bring to a boil over medium-high heat, stirring constantly until mixture thickens.  Cool 10 minutes.

6.  Spread meringue over hot filling.  Make sure meringue covers the entire surface, including the crust.  Increase oven temperature to 350°F  and bake until meringue is golden brown, about 18 minutes.  Cool completely. Cover and refrigerate for several hours or overnight.
Pin It