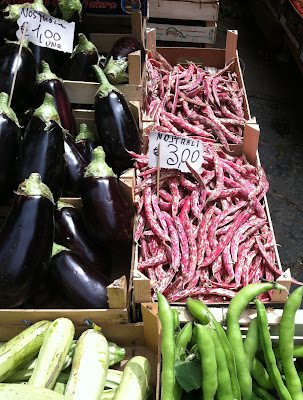 Up until a couple of years ago I had never heard of crostinis.  And now they are everywhere.  It seems that any and everything is a crostini, such as eggplants, tomatoes, sardines.

According to The Prentice Hall Dictionary of Culinary Arts, crostini is Italian for 'little toasts' and is used to describe small, thin slices of toasted bread, usually brushed with olive oil.  Who knew!

Sicily was overflowing with crostinis.  And why not?  If you have leftover bread, why not use it to make something edible - think bread pudding.  For centuries clever cooks have turned the 'not so edible' into the 'this is delicious'.

One crostini that we consumed while in Sicily was made with eggplants and chopped tomatoes.  Both of these plants grow extremely well in the Mediterranean.  And cooks make good use of them. 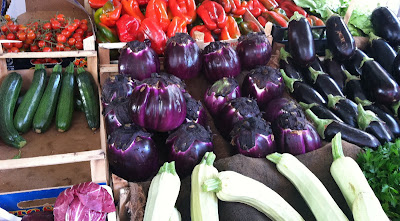 Here is my version of Crostinis with Aubergine Tapenade.  I hope you enjoy them.  Some countries refer to eggplants as aubergines.

Directions:
1.  Preheat oven to 350°F.  With a sharp knife, pierce eggplant in several places.  Place on a rimmed baking sheet and bake until soft, about 1 hour.

3.  Thinly slice the bread, on the diagonal, into
about ½-inch thick slices.  Brush with olive oil and place on a sheet pan.  Place in the oven at 350°F, until they are crisp, about 15 minutes.

4.  Dice the tomatoes into small pieces, about ¼ inch.  Combine with eggplant mixture.

5.  At this point, you can top the bread with the eggplant tapenade or set them out separately and allow your guest to top the bread as they desire.

As to which one I would do, it depends on how much time I have. 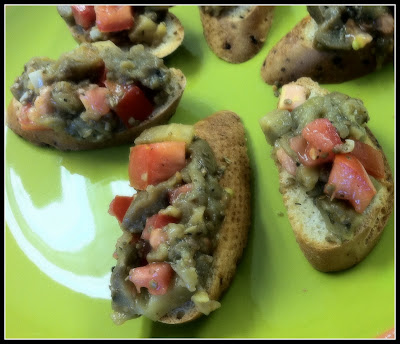