Since returning to the states, I have learned that panelle is served as a sandwich, Pane e Panelle.  It is especially popular in Palermo, Sicily.  My understanding is that panelle is found in Sicily due toArab influence.  The Arabs ruled Sicily at one time.

Basically, panelle is chickpea flour, water, salt and sometimes, herbs such as parsley.  This mixture is cooked to hydrate the beans.  It is then spread onto a flat surface, allowed to cool and cut into serving size pieces.

Here is my version of panelle. 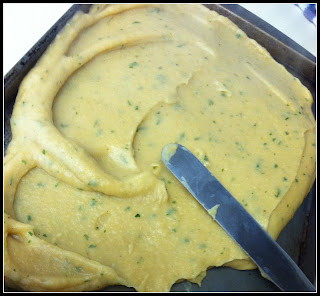 Directions:
1.  Combine chickpea flour, water, and salt.  Cook over medium heat, stirring constantly.  Add parsley when mixture begins to thicken.  When mixture has absorbed all the water and is pulling away from the side of pan, quickly spread onto a jelly roll pan or cookie  sheet.  Cover with plastic and allow to cool.

Note:  The chickpea flour mixture can be cooked through the first step and refrigerated for one day. 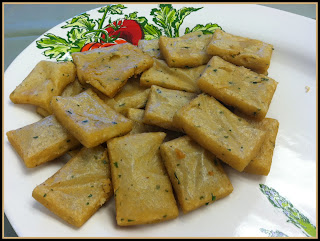